The human heart beats 100,000 times a day. It is highly sensitive to emotional and physical stress in the body. All of us have experienced the depths of sadness, when it feels like the heart is broken, the rapid flutter when in love and the pounding of the heart when anxious.

This time of year, particularly this year, our hearts are put to the test.

Every four years 32 countries compete in an international football (soccer in the US) tournament called the World Cup. Usually held in the summer, this year the games are now, smack in the middle of the holiday season. It is wildly popular, making it the most-watched sporting event. For scale, I compared it to the Super Bowl:

More than half of the world watched the last World Cup and the same is expected this year in Qatar. This year’s World Cup is controversial and corrupt at its core. I am conflicted watching because of serious migrant labor and human rights abuse that exist in Qatar. In fairness to the players and to honor their skills, I watch and suppress the negative thoughts towards this Cup and what led to its location.

Football is called The Beautiful Game. It is, quite simply, beautiful to watch. The game is fairly simple and requires no special equipment. It goes back to the basics, a person and a ball. It doesn’t even need to be a soccer ball. It unites international fans from all over the world. Any given team may have zealous supporters from hundreds and thousands of miles away.

The World Cup triggers passionate, emotional responses unlike any other sporting event. Its effects are explosive – spilling over to the stock market, mental health, and patriotism. Israel is not competing in the World Cup but the country is transfixed by the games. Bars are packed, smokey and nearly 100% men. By now I am used to being the only woman in a sports bar. The screams following a goal reverberate through the air, down the street.

World Cup Syndrome is described as a sudden increase in gastrointestinal, cardiovascular and respiratory symptoms caused by watching matches. This year a hospital in China set up its own World Cup Syndrome clinic. After Argentina’s loss to Saudi Arabia, many Chinese fans showed up with chest pain and shortness of breath. All of the doctors who work there play for the hospital’s football team, so they are better able to empathize with the emotions of the fans.

In the World Cup in Germany in 2006, it was found that viewing a soccer match more than doubled the risk of acute cardiovascular events, particularly in men with known heart disease. In Brazil in 2014, a study found a rise in heart attacks when the games were played there. Most deaths occurred during the final game when Brazil played Argentina. Losses have a negative impact on the stock market because investors are more irrational during games. On the other hand, France’s suicide rate declined significantly when they hosted the cup in 2012. 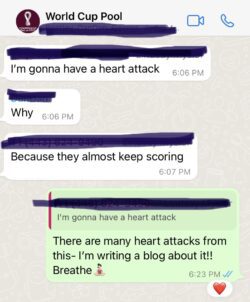 A recent text exchange with my betting pool👆

Let us end by addressing the elephant in the room – the hotness factor! Soccer players are strong, lean, fast and so sexy.

The World Cup is here. Let’s all try to chill and enjoy it.

Have a beautiful week,