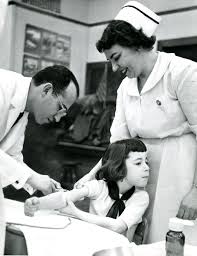 “Your mom walks funny” a friend said one day in elementary school. I had never noticed my mom walking any different than anyone else. Just like I didn’t realize my dad had a Czechoslovakian accent. That is when I found out my mom had polio 40 years earlier. The virus had attacked her gastrocnemius muscle, the calf muscle in her left leg. She had a slight limp. She was one of the lucky ones.

Lorraine (left) Lucille (right) – edited since first published {I got it mixed-up, my sister corrected}

At age 5, the ever popular Eder twins went to a birthday party. My mom contracted the virus at that party. Her identical twin Aunt Lucy remained healthy.

In the first half of the 20th century people lived in fear of summer, “Polio Season”. Pools, fountains and movie theaters were closed. The virus, poliomyelitis, produced inflammation of the spinal cord. Speculations about what caused the illness ranged from bananas injected with tarantula poison to cats to wireless electricity to doctors’ beards. To this day, I never eat the very bottom of a banana, that is where the tarantulas inject! Parents were blamed for tickling their children. Unlike Covid-19, polio targeted children under the age of 5, a horrifying thought. Adults were also at risk.

Unlike Covid-19, polio spread from one person to another by fecal – oral transmission, by way of food, water or poor hygiene. Symptoms ranged from mild (sore throat and fever), to paralysis in about 1 in 200 cases. Although the paralysis was transient in some, many victims were confined to crutches and wheelchairs for life. Prognosis and morbidity depended on which muscles were effected. My mom was lucky that the virus settled in her left calf only.

When the virus attacked the muscles of the chest, often the iron lung was the fate. While the iron lung was primarily for acute illness, there were people that lived in the chamber for decades. The iron lung is the predecessor of todays modern ventilator. Unlike the ventilator, intubation was not required and it utilized negative pressure rather than positive pressure to achieve the same effect. The price was $1500, considered extremely costly at the time. The iron lung covered the body up to the neck. The image of hospitals full of these massive metal cylinders are chilling.

There was no cure. A vaccine needed to be discovered urgently. Franklin Delano Roosevelt, the President at the time, contracted the virus at the relatively late age of 39. Strategic event planning succeeded in keeping his disability from the public eye. Roosevelt started the National Foundation for Infantile Paralysis, later known as the March of Dimes. People were encouraged to send dimes, conveniently slipped into cards.

Jonas Salk was 33 years old when he started working on a vaccine at the University of Pittsburgh, funded by the March of Dimes. Three floors above his lab was a polio ward filled with people encased in iron lungs. His idea was to use killed virus vaccine, rather than a live-attentuated one.

The first vaccine for polio was given to more than 200,000 children. The process used to render the virus inactive was defective. Within days and months, reports of paralysis in 40,000 children and death of ten children forced a stop to its administration. This became known as The Cutter Incident Jonas Salk was well aware of the tragic outcome of that vaccine.

It took Jonas Salk two and a half years to develop the polio vaccine. In 1953 he tested the virus on himself. This vaccine, administered in four separate shots, was tested in a massive placebo-controlled trial and approved.

That vaccine changed the world. An oral live-attentuated vaccine was developed by Albert Sabin several years later, which replaced Salk’s, due to ease of administration and higher efficacy.

Post-polio syndrome can affect 25-40 out of 100 survivors decades after the initial infection. It is not contagious. Muscle weakness, fatigue and joint pain are the primary symptoms. It is not life threatening but can make life challenging depending on severity.

All of this virus-speak is no longer foreign to us. The fear and terror are all too familiar. Thanks to cooperation, persistence and gifted scientists, the United States has been polio-free since 1979. The disease exists in a few countries in Asia and Africa but steps are being taken toward eradication.

This is a story of HOPE. We must be patient waiting for a safe effective vaccine that has gone through vigorous clinical trials. The agonizing story of polio is part of our recent history. The impact of the vaccine is one to be celebrated. My mom made sure we knew about Jonas Salk. He was her hero.