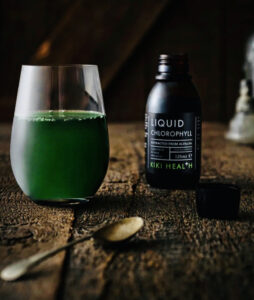 Your intriguing post on L-theanine inspired me to ask about natural supplements for mental health. I was told that a drop of liquid chlorophyll in your water can do wonders for your mental health and clarity, skin, digestive system and more. I thought chlorophyll was for plants! Can you shed any light on this? Can adding chlorophyll to our water really lead to such amazing health benefits?

These fads are flooding our social media feeds. Everyone wants to know what other people are doing. We are all looking for new ideas. Paradoxically, we have become somehow more connected with faraway people in this pandemic, and people all over the world are experimenting and doing the same thing. It is fascinating how trends appear and take on a life of their own. From a small kitchen in Limerick to an apartment in Sydney people are making TikTok pasta and drinking chlorophyll water.  It has made the world a small village.

I made a call to a local health food store in Brisbane to ask if they have chlorophyll and the sales person said “it’s flying off the shelves! We can’t keep it in stock, I don’t know why.” Instagram is why.

Drinking chlorophyll has gone viral on Instagram and TikTok as a cure-all for everything from cancer to body odor. 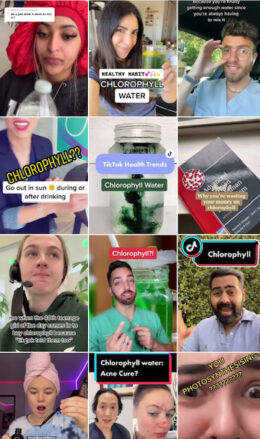 Remember chlorophyll from science class? It absorbs sunlight and converts it to energy through photosynthesis. It is packed with minerals, vitamins (A, C and K) and antioxidants. It makes plants healthy.  Could it do the same for humans?

Chlorophyll as a remedy didn’t start with Instagram but it is making a huge comeback. It has been used since the 1940s mostly to neutralize odors. It was added to toothpaste, mouthwash and cigarettes. Clorets gum had chlorophyll in it and was popular for making breath “kissing sweet.” 💋 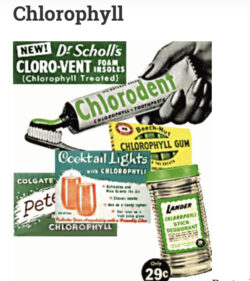 Overall the scientific evidence of the far-reaching claims is just not there. The Linus Pauling Institute has researched chlorophyll in rodents, rainbow trout and humans. They have found “safety-wise, or toxicity-wise…no problems with chlorophyllin (the form used in supplements) because it has been used for over 50 years in humans…with no evidence of harm”. There are few placebo-controlled trials. Studies have shown that chlorophyll contains antioxidants that help repair cell damage. There is clear evidence for a link between healthy diet and chronic disease. Regarding mental health, because depression is now understood to be an inflammatory state, I often prescribe green leafy vegetables to my patients.

Obviously we should not look to TikTok for medical advice. Always keep a skeptical eye on anything you put into your body. Chlorophyll supplements are not regulated. In this case, a bit of chlorophyll water in the scheme of things is not a bad suggestion. Don’t let it replace green leafy veggies in your diet!