Mercury in retrograde – the default scapegoat when you’re having a bad day, your computer crashes or if you have to explain doing something really impulsive. Before we start judging it as fact or folly, L+M wants to know what it actually means. It suits me as a once aspiring astronaut who always wondered about astrology.

Mercury is a tiny planet that moves super fast. When Mercury zips around the sun, as it passes Earth it appears to be moving backwards, from Earth’s vantage point. This optical illusion is what is known as Mercury retrograde. This happens about 3-4 times a year and lasts three weeks each time.

Stargazers have always been fascinated by retrograde motion. When Mercury speeds by, it creates a sort of disruption or turbulence that is thought to affect us on earth. In astrology, Mercury is associated with communication, relationships, travel, contracts, and computer codes.

If you ask me, most people could use a bit of an expressive shake-up.

Rather than a time for negative consequences, maybe we can turn it on its head and see it as a time for change – an opportune time to get out of a routine that isn’t working.

As a scientist and researcher, I was unable to find any hard data; e.g. increase in calls to the Genius Bar or airline delays during Mercury retrograde. That may be because the research has not been done.

“There is absolutely no evidence, or reason to expect from science, that Mercury or any other planet has any effect whatsoever on life on Earth,” says Michael Shera, Curator and Director of Astrophysics at the American Museum of Natural History.

Considering the effect of the moon on the tides, I take issue with this guy! The truth lies somewhere in between. Perhaps astrologists overly attribute while scientists may not be paying enough attention.

The majority of believers in astrology (and religion) are women. It is a form of magical thinking – a defense mechanism that can subconsciously provide a sense of control over the environment. It feeds into the stereotype of the fanciful, gullible female falling for pseudoscience over hard facts. Then again, strategically placed horoscopes dominate women’s magazines. Have you ever read a horoscope in Esquire? Is this heavy-handed marketing or something inherent in women? The advertising is so skewed at this point it’s hard to tell. Horoscopes need some serious re-branding.

Like Carl Sagan, it’s OK to be a skeptic and a stargazer. Real men see the moon. We all need a sense of wonder.

Humans have been trying to find meaning in the planets since ancient times. The world is divided between believers and non-believers. When planning my daughter’s wedding, I avoided mercury retrograde. Shame on me, as a scientist! Well, I am both a scientist and a dreamer. In this precarious world I’ll try to control as many factors as possible, whether real or imagined.

Admit it, you are a little curious by now… here are the dates for the coming year:

I would love to hear your thoughts about this! Any good retrograde stories out there? 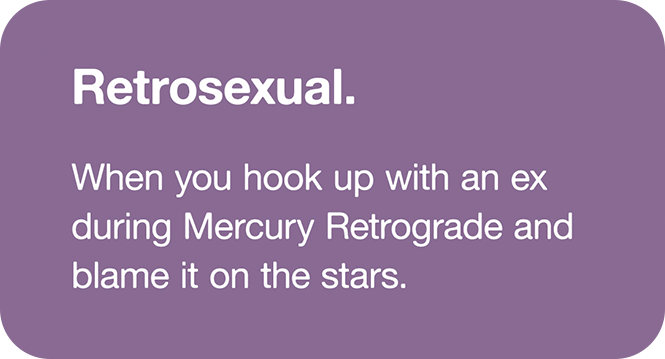