In this society, looking back is considered very uncool. We are encouraged to be in the present. The past is seen as an obstacle to moving forward. Reminiscence is considered a nostalgic waste of time.

We should be looking ahead at the next new path.

I believe most of us are not looking back enough.

How much do you know about your family history? Maybe you know where your parents were born but what about your grandparents? Your Aunts and Uncles? Can you picture their family life?

I am going to tell you about an incredible experience. I’m going to talk about a pilgrimage, for lack of a stronger term. This word denotes a journey to a sacred place. Actually it can be a simple exploration of one’s lineage. My brother Steve, sister Rita, and I set out on a true pilgrimage to my dad’s birthplace. Steve, an extremely knowledgable historian/Holocaust researcher prepared the groundwork for us. He had fastidiously mapped out our father’s town to the point of fairly accurately locating his exact house. He outlined the path the family took to the concentration camp. My cousin Richard came along as our guide. His presence was invaluable for his multilingualism, personal experience and high entertainment value.

We bid farewell to our new families and set out to explore our old one.

The four of us crossed the ocean from our respective homes and met in Budapest, which was the center of culture and commerce back in the day. My grandfather (or sometimes my dad) would take the overnight train to Budapest to buy leather, as my grandfather was a shoemaker. Later my dad was taken to slave labor in Komarom, a short distance from Budapest. He lucked out and worked as a shoemaker. “I had a good deal there”, he says. He spent weekends with relatives in Budapest. He had a “sweetheart” there too. People traveled to Budapest after the war to find each other, to look for surviving family members. The day the Japanese bombed Pearl Harbor, my dad was there. He woke up and heard on the radio.

My dad is from the mountains of Subcarpathia in what was Czechoslovakia, now part of Ukraine. We headed there next. Passing the border was not easy. Rental cars need extra insurance for Ukraine. We were refused entry at the Záhony crossing. Richard sweet talked the cute Polish UN observer into telling us we could cross via Slovakia.

The next few days were spent in my dad’s neighborhood. We located his Svalava street, by the landmarks that Steve provided. Then the highlight of the trip: we found the legendary house. I never believed it would still be standing or that we would be able to identify it. A lovely place on a quiet street right across from the Svalava river. We were lucky to find a woman in the yard. Richard explained the story and although she was in a hurry, she allowed us to come in and look around. She kept reassuring us that she purchased the house, that it was not taken.  When we sent pictures home to our dad he responded “Oh!..Oh!…they’ve remodeled!” 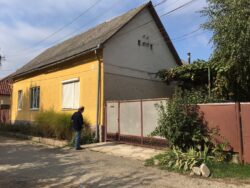 We saw the train station, a place so central to life at the time. We wandered into Nelipeno to find his mother’s house but it was gone. We found an old Jewish cemetery. We absorbed the landscape, the trees, the smells where our father spent his childhood. There was a full social and cultural life here. People were working, kids were out playing.

My dad came from a family of 8. His mother was put on a train with his two youngest sisters. They went directly to the ovens in Auschwitz. His father and sister died at some point during the Holocaust. The three eldest survived.

Following the path of my grandmother and her two youngest daughters, we drove to Poland, to the Auschwitz concentration camp. We saw the train tracks in the entrance where they stepped off the cattle cars. Those two little girls must have been terrified. They had never been so far from home. You have probably seen these or similar pictures. I was shocked at how enormous it is – larger than 5,000 football fields. Auschwitz was made up of three camps; an extermination camp, a slave-labor camp and a prison camp. Most of the people who arrived there were of no use to the Nazis and went directly to the gas chambers. There were four large crematoria composed of a disrobing area, 8 large gas chambers and 46 crematorium ovens. Those sent to slave-labor dug the deep trenches we saw around the camp. They worked on expansion of the grounds, forced to build their own death camp. In the span of 5 years about 1.5 million people were killed there. 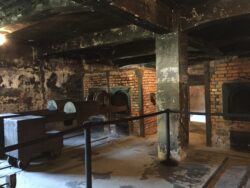 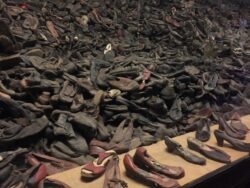 We left Auschwitz feeling spent, dusty and anguished. We wanted to toss whatever clothing we were wearing and never wear it again.

We arrived in the lively city of Krakow in a daze. Richard left us at that point, heading back to Czech to see his mom. What a mensch for taking this trip with us! 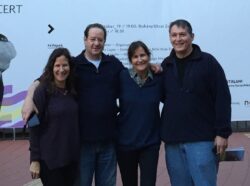 There is no way to unsee what we witnessed on this trip. There was life before the Holocaust for these Czechoslovakians. One that is too often overlooked. They were all just going about their business. For many centuries the Jews practiced openly and attended synagogue. They were free.

Each one of us responded differently to what we experienced. Rita was more demonstrative/external, Steve was quiet/internal and I was somewhere in between. Just as you would expect knowing our personalities dating back from childhood.

I needed to make this trip to understand and enrich my life, but only once. I won’t be going back. I feel it will take years for me to fully integrate and fully understand how it impacted me.

While our dad was very moved that we made the trip, he has no desire go back. He’s getting up there, he was born in 1920. We are glad we did this now, while he is still around. 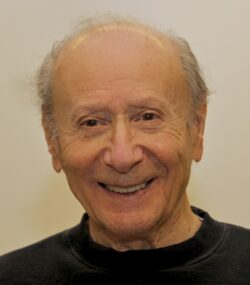 I would encourage all of us to look back. I used to see my parents as these people who raised me and were always old. I never gave much thought to their childhood, to their lives before me. We need to be curious. This is our DNA! Ask the questions. They may say that they don’t have a story. Everyone has a story.

Visit the small town in Idaho, or the county in Ireland or wherever your roots lie. It may not be Cancun or the place you dreamed of vacationing but this is a different type of travel. This is a pilgrimage. 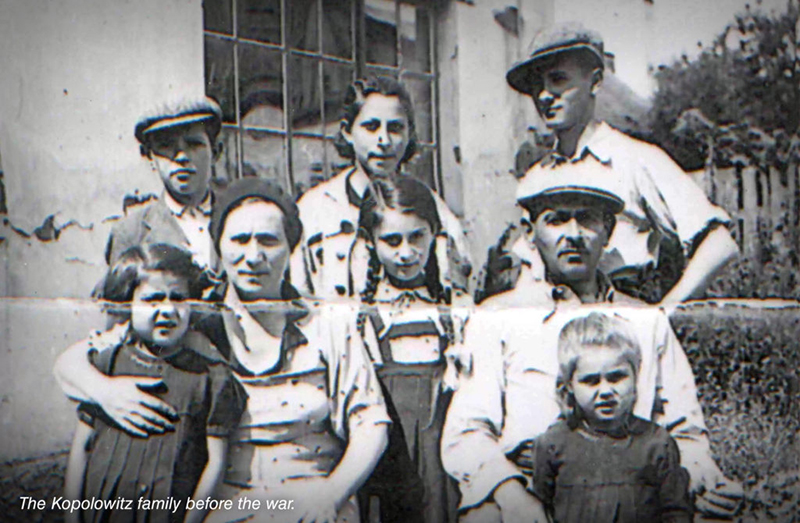